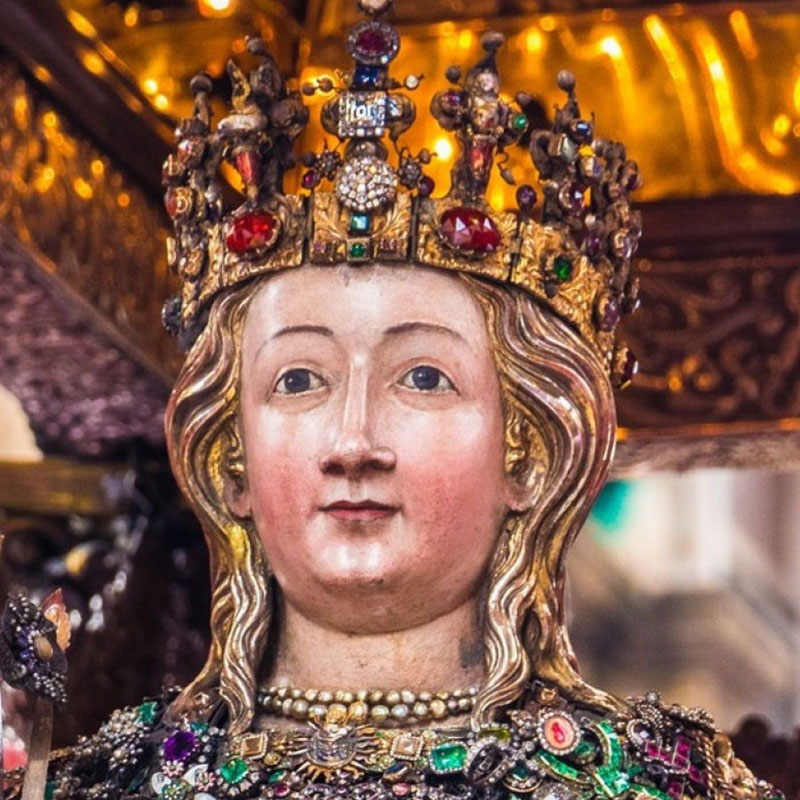 Posted at 19:19h in General information articles by ionicatour2018

For those who decide to visit Catania in these days, they will find a city in turmoil for the approaching of the most important period of the year for Catania citizens: the celebration of the feast of Sant’Agata, a perfect union of faith and folklore, which will see the his highlight day 3, 4 and 5 February 2020. The cult of the patron saint has very remote origins and its popularity is not limited only to the island borders: thanks also to the numerous Sicilians who live abroad, the direct of the three-day celebration it will also be broadcast on television overseas.

This year even the feast of Saint Agatha will end in CNN’s television program Quest’s World of Wonders, which will dedicate half an hour to the rituals and celebrations of the city of Etna.

THE MARTIRE PATRON OF THE CITY OF CATANIA

The story of Sant’Agata, whose name in Greek means “good”, is painful and very ancient.

Agata was born in Catania in the first decades of the III century from a noble and rich family. The historical context of that period saw the Roman emperor Decius in power, who in 249 A.D. issued an edict of persecution against Christians to restore the worship of the ancient gods.

In this climate the figure of the Roman proconsul Quinziano fits as regent of the city of Catania, who, falling in love with the beauty of Agata, tried in vain to conquer her: the girl in fact had made a vow of fidelity to Christ a short time before. After countless refusals, Quinziano decided to lock her up in a cell and torture her with fire and rods. It was on that occasion that the torturers tore off his breast.

Agata then died in a cell because of the injuries sustained on February 5, 251.

Immediately after his death a great feeling of devotion towards the Martyr spread among the people of Catania, who began to celebrate his figure up to the present day. 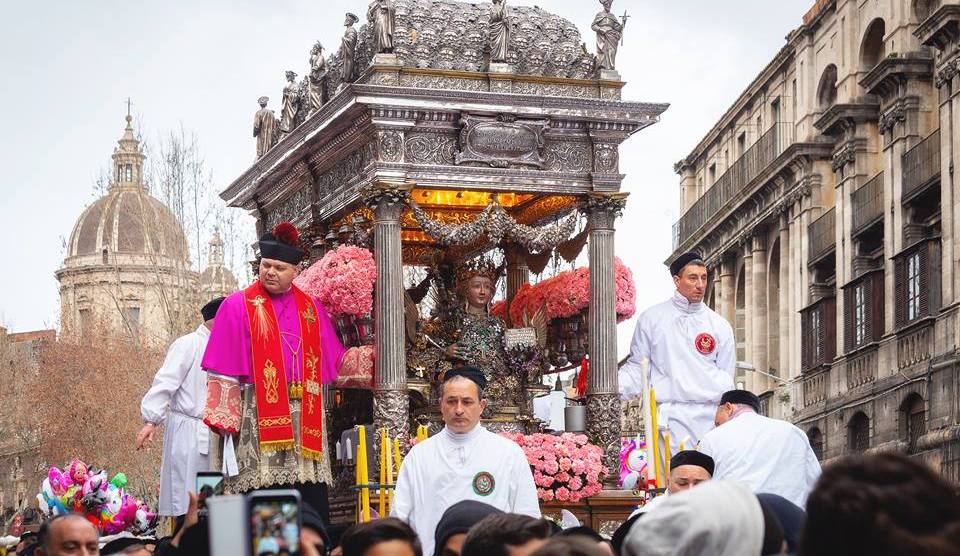 FESTIVAL OF SANT’AGATA 2020: THE PROGRAM

As anticipated, the feast of Sant’Agata takes place in early February and sees the participation of thousands of faithful and devotees dressed in the traditional “sack”, who actively assist and participate in the procession of the vara with the bust containing the relics of the Santa.

The appointment with the Fiera di Sant’Agata is also inevitable, which will take place inside the Villa Bellini starting from Friday 31 January and until 6 February, from 9.00 to 24.00.

On February 3 he will see the procession of the offering of wax to Sant’Agata which reaches the Cathedral. The protagonists will also be the Candelore, golden votive waxes representing the working class, built in wood and adorned in various styles. Established in the seventh century, they represent a guild of arts and crafts that, both in the three days of religious feast and ten days before, wander along all the streets of the historic center and some peripheral areas of the city, recognizable by their gait and their indistinguishable “‘nnacata”.

Afterwards it will be up to the Senatus Populusque Catanensium to make its way along the main street of the city with the traditional passage of the Senate carriages which, with the main city authorities on board, will leave from the Court of Palazzo degli Elefanti to reach the church of Sant’Agata alla Fornace in the northern part of Piazza Stesicoro.

Do not miss the highly anticipated pyromusical show on the 3rd evening starting at 20.00, the famous “fires of the sire or tri”, which, like every year, will send the thousands of people flocked to Piazza Duomo from all parts of SIcilia and not only.

February 4 is certainly the most exciting and moving day of the festival, because it marks the first meeting of the city with its patron saint. In fact, the dawn of Tuesday will see the celebration of the so-called “Aurora Mass” by the Archbishop of Catania, with thousands of white-robed devotees waving a handkerchief at the sight of the Saint.

At the end of the mass begins the procession of the fercolo with the relics, which lasts an entire day and crosses the places of martyrdom, retracing the history of the “Santuzza” which is intertwined with that of the city. The devotees, taking small steps among the crowd, drag the fercolo shouting in the crowd: “citizens, citizens, long live Sant’Agata”! The tour ends on the morning of February 5, when the fercolo returns to the cathedral.

On 5 February he sees the fercolo covered with white instead of red carnations, a symbol of the purity of the patron saint. In the late morning, the pontifical is celebrated in the Cathedral and, at sunset, the second part of the procession begins, with the streets of the city center as protagonist: from Piazza Borgo with its fireworks to the highly anticipated “climb of San Julian”. An unmissable moment full of magic and sacredness is certainly marked by the passage of the Saint in Via Crociferi, where the cloistered nuns sing songs from behind the grates of the Benedictine monastery.

Late at night the fireworks mark the closing of the celebrations, when Catania returns the reliquary and the casket to the cathedral.

Devotees will have to wait until August 17th to review the remains of the patron saint, for the summer version of the feast of Saint Agatha, which sees the celebration of a solemn mass in the Cathedral and a procession through the streets of the cities.

The Festa di Sant’Agata sees the preparation of some traditional sweets that symbolize the Santa Catanese: in addition to the famous calia and simenza, present in every stall in the streets of the city, we find the Cassateddi or “Minni di Sant’Aita” and the Olivette . The Cassateddi symbolize the breasts that were torn from the saint during the torture of the martyrdom to which she was subjected, while the olivette refer to the legend that the virgin, chased by Quinziano’s men and now arrived near the praetorian palace, had stopped to rest an instant. At the same time he stopped, an olive tree is said to have appeared out of nowhere and the young woman was able to take shelter and even feed on her fruits.